Ukraine: Masks of the Revolution

Will the West Finally Admit the “Dirty Truth” Behind the So-Called Ukraine Revolution, Revealed by French Documentary 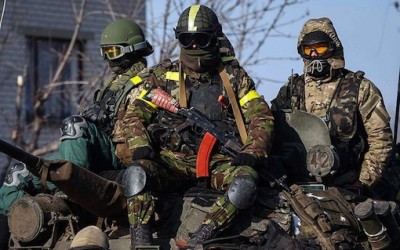 This documentary lifts the veil on the deception of the US/Europe/NATO elites and their ever faithful media bullhorns. It informs us of a planned coup, described by the head of Stratfor as the most blatant ever, of the butchering of innocent people in the Odessa Trades Hall at the behest of politicians and oligarchs, and the continuing presence of heavily armed neo-Nazi thugs controlling the streets and occupying politically powerful positions in government.

I have heard the legal and geo-political arguments for and against the annexation or return of Crimea to Russia. No need to go into it here.

However, if you understand the rabid ultra-nationalism, the fever pitch blood lust and the climate of fear emanating out of the overthrow of Yanukovych and the aftermath, you will understand there was no real alternative.

The added element which struck such fear and dread in the Russian speaking Ukrainians of the east and south east was the rapid rise to prominence and infamy of the neo-Nazi militias, recast as such from their street thug roots.

A group of Crimean’s travelled to Maidan to express their democratic views. The Fort Russ website explains their fate.

Eight buses with Crimeans, who participated in Kiev in Antimaidan rallies, were returned home [after their opponents have won]. Near Korsun in Cherkasy oblast, the convoy was ambushed by the armed thugs from the Right Sector. As became known later, the Nazis were aware of the movement of the column and were expecting the Crimeans.

The captured buses were burned, their passengers were brutally tortured, beaten and humiliated. Several people were beaten to death and murdered.

“when we were in trouble, not one military, nor the police saved us. No one would give a damn. When they let us go, told us to pass a message that they will soon arrive in Crimea, and it will be much worse than in Kiev. I’m glad that someone will protect us.”

An empty threat? Hardly. They massacred over 100 at Maidan.

Journalists and politicians were murdered, others bashed, including 2 presidential candidates. They shouted “Russians on knives” and vowed to rampage in the east and wipe out anyone who dared to oppose their violent ultra-nationalism. Even the police were too scared to stop them as they smashed up Russian banks, bashed defenceless people on the street, took over buildings and tragically attacked the Trades Hall in Odessa.

When the survivor of the bus convoy said they were “glad that someone will protect us”, they naturally were referring to Vladimir Putin. Failure to act to protect would likely have seen the people of Crimea suffer the fate of many other Ukrainians, bombed in their homes by the military or bashed with poles and shot by thugs on the street.

Faced with this prospect, it would have been immoral not to act to ensure protection of Crimean’s. And what was their attitude to the vote to return to Russia? 96.7% in favour. That is what i call emphatic.

It is very unlikely the Russian troops based legally in Sevastapol, Crimea as part of the Black Sea Fleet, under a Russia/Ukraine 1997 agreement, would have allowed attacks on civilians or infrastructure. Vladimir Putin would have acted swiftly and decisively if any such attempts were made. The referendum ensured the safety of Crimean’s and defused a potential military conflict between Russian and Ukrainian forces.

Placing this in context, the indignant, self-righteous, hypocritical squawking among US and European political elites and their protectors in the mainstream media, ring hollow. Appeals to lofty idealism of the Helsinki Accords and the UN Charter regarding the so called Crimea “annexation” were disingenuous and cynical.

The video doesn’t extend to the crimes of the Ukrainian regime against the people of the Donbass, but there are plenty of videos that do.

Shelling of homes, schools, hospitals and factories was a deliberate strategy. The idea was to terrorise the population into submission or to flee, thus being a crime against humanity and ethnic cleansing.

There is an abundance of footage of civilians sifting through their destroyed houses, asking why has Poroshenko done this to them. People in shock said where are the terrorists here? We are all civilians here, normal men women and children. They said they just wanted to live in peace and were terrified at being bombed. They didn’t accept the legitimacy of the coup in Kiev, but, rather than engage in dialog, Poroshenko and Yatsenyuk engaged in inflammatory language of claiming the people were terrorists and they would not stop until all the terrorists were wiped out.

Such aggression understandably sent shivers up the spines of the people in Lugansk and Donetsk. The sense of foreboding is unmistakable in videos I have seen in the period between February and May 2014, when the “anti-terror operation” swung into action. The action was the slaughter of innocent civilians. Under impartial justice, the regime in Kiev would be held accountable for their crimes. However we know we live in a world of victors justice, where the victors sneer when valid accusations are made against them, while at the same time they triumphantly pursue the losers, adding insult to injury.

Imagine a government which calls millions of its citizens terrorists. Citizens which weeks before were seen as part of the citizenry. Clearly the Kiev regime was pandering to a militarised and powerful ultra-nationalist movement. This was a movement who weren’t satisfied with the ouster of Yanukovych, something which wouldn’t have happened if not for their brutal violence. Emboldened, they believed they should be rewarded. And rewarded they were too, with positions in government, including in key military and security ministries.

These forces, namely thugs from Right sector, Azov, Aidar, Odessa and Dnepr battalions, were unleashed on the people of Ukraine, causing mayhem as they swarmed eastward.

The people of the east heard about the atrocities proudly carried out by these Nazis. The Odessa massacre, the Mauriopol massacre, the murders and disappearance of the bus convoy bound for Crimea; the killing and public bashings of journalists; the brazen attacks on politicians, forcibly removing government officials and replacing them with oligarch backed puppets.

If anything, Russia has not taken enough action in protecting Russians in Ukraine. It is likely, but not proven that equipment was supplied to the separatists. Russian volunteers fought alongside the separatists, but is that so strange? After all they were fighting alongside and defending fellow Russians.

The people of Eastern Ukraine had one shared belief. They did not at all accept the legitimacy of the Kiev junta. A CIA/State Department coup, where members of the interim government were hand picked. This included Oleh Tyahnybok, a far right extremist of the Svoboda Party. Washington is more than happy for extremists to give regime change a bit of biffo.

Apart from that, there was a division among people who wanted to join Russia, and were desperate for Putin to do what was necessary to achieve re-unification (not likely without considerable military force). As an aside, some of the delusionalists among the Nazi ultra-nationalists were just itching to fight some Russians. A report from the US think tank, the Rand Corporation, shows Russia would conquer Latvia, Estonia and Lithuania in a (theoretical) war within 60 hours. Is there any greater self-deception and delusions of grandeur than that of the mindless extremist? You are not going to get much chance at fighting when the adversary is at the doorstep of the Verkhovna Rada within hours.

The desire of others was to be granted special status in a decentralised Ukraine, which was incorporated into the Minsk 2 agreement of February 2015. This is being delayed by a reluctant Kiev regime failing to introduce the necessary constitutional reform for this to be realised. The Poroshenko regime is all too aware that the ultra-nationalists are livid at this prospect and will do what they can to sabotage constitutional change. Ultra-nationalists such as Right Sector and Svoboda have called for the impeachment of Poroshenko, highlighting the honeymoon is well and truly over. Training, arming and incorporating neo-Nazis into the national security establishment may be the biggest mistake the Kiev junta ever made.

Poroshenko may be the next President to flee, dodging bullets in the middle of the night.

The people of the Donbass may be relatively physically safe due to de-escalation, though not total cessation of hostilities. This however has not made life easier in their ruined cities as they rely on Russia for humanitarian aid and support. They are however seeking to be self- reliant and using the industrial capacity of the region to work towards this self-sufficiency.

Given the horrendous events since early 2014, it is hard to see a unified Ukraine. Autonomy or incorporation into Russia is the inevitable desire of people traumatised by the loss of their loved ones.

Grief with time subsides. Anger at the US sponsored Kiev war criminals on the other hand may be eternal.
Source: http://www.globalresearch.ca/will-the-west-finally-admit-the-truth-dirty-truth-of-the-so-called-ukraine-revolution-revealed-by-french-documentary/5505682
Related Video: Victoria Nolan’s Admits Washington Has Spent $5 Billion to “Subvert Ukraine”