(NaturalNews) Last week, LifeNews reported on how a California pro-lifer captured his disturbing exchange with a notorious San Diego abortionist[1] on video. Now, a local hospital has terminated its relationship with the abortion practitioner.

(Article by Steven Ertelt and Micaiah Bilger, republished from http://www.lifenews.com)

Abortionist Robert Santella has a bad reputation with his patients,
having faced several disciplinary measures from the California Medical
Board. He also has been accused of injuring several patients in botched
abortions.

Recently, pro-life advocate Zephaniah Mel stood
outside Santella’s Family Planning Associates abortion clinic in San
Diego and was approached by Santella. The 72-year-old abortionist’s
demeanor and remarks are extremely disturbing. At one point, Santella,
in a demonic rant, told Mel that he “loves” aborting babies.

“Why?” (Santella strides up to within inches of Mel, coffee cup in hand)

“Because it’s a sin before God.”

“Why?… Stinky breath.” (Santella breathes his coffee breath into Mel) 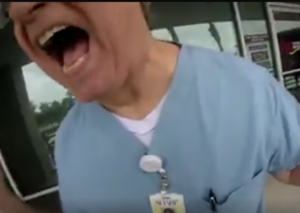 “I hope that you come to Christ, sir.” 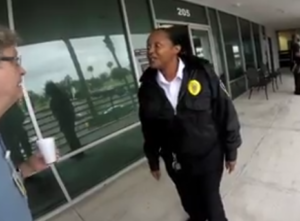 “I hope you come to Christ.”

“You will have a darkened heart.”

“You will stand before God in judgement…”

“You will stand before God in judgement…”

“All the babies that you kill…”

(At this point, security guard approaches Santella with message and he goes back into clinic.)

Now, the pro-life group Operation Rescue[2] says Santella has been dropped by a local hospital:

Allyson Smith was appalled by the recent video showing Robert Santella, an abortionist with the Family Planning Associates abortion facility in San Diego, growling in a demonic “freak-out” at another pro-life activist.

Smith noticed that during his rant, Santella wore an identification badge from Sharp Healthcare, a group of hospitals throughout San Diego County.

Due to her long-time involvement in the pro-life movement, Smith knew exactly what to do. She posted to her Facebook page that she contacted Sharp Healthcare via e-mail on the morning of June 17.

Hi there, I would like to bring this video to your attention. The crazed doctor in this video is Robert Santella, who performs abortions at Family Planning Associates on Miramar Road. You’ll notice he is wearing a Sharp Healthcare ID tag. A quick Internet search reveals that he is affiliated with Grossmont Hospital. Why is this “doctor” allowed to be affiliated with Grossmont Hospital? He is nuts and should be fired. What will you do about him? Thanks.

Soon, she received a reply from Sharp’s Grossmont Hospital:

Hi Allyson:
Thank you for your message. We appreciate your concerns regarding this physician, and we can assure you that he is no longer affiliated with any of our hospitals, he is not employed by our medical groups, and he does not practice or have admitting privileges at any of our facilities. We are currently looking into other aspects of this matter, and we will provide updates as we have more information.

“This is a great example of how much can be accomplished with just a little smartly directed effort,” said Troy Newman, President of Operation Rescue, which protested Santella regularly in the 1990s and early 2000s before relocating to Kansas. “Allyson’s letter will probably save a lot women from being subjected to Santella’s unstable behavior.”

Santella allegedly botched at least two women’s abortions in 2015 alone, LifeNews[3] reported. Pro-lifers who witnessed one of the incidents said one woman’s mother called 911 for her daughter after Santella and his staff refused to.

Santella also has a bad reputation with the California Medical Board and has faced disciplinary measures on several occasions. The medical board also is reviewing a new case[4] alleging that Santella neglected his treatment of five patients, according to the report.

“If only the California Medical Board had taken stronger measures with Santella when he showed incompetence in 1984 and 2000, a lot of human misery could have been avoided,” said Newman. “Some people are not fit to practice medicine, and Robert Santella is among them. We pray the Medical Board will take sterner measures to limit his options so he will be forced to look for another line of work. We also pray he gets the spiritual and mental health assistance he obviously requires.”