Propaganda and Indoctrination To Be Slaves To Zionists And Israel, How Does Donald Trump Fit In?
[jwplayer config=”Music” mediaid=”31980″]

Today Dr. Duke addressed the terrorist attacks in Belgium, making the point that without massive non-European immigration into the country the attacks simply could not have taken place. He also made the point that in Europe, as in the United States, the driving force behind mass immigration is the organized Jewish community, which feels its interests are best served by a “diverse” society divided between antagonistic groups that can be easily dominated by their cohesive and privileged tribe. 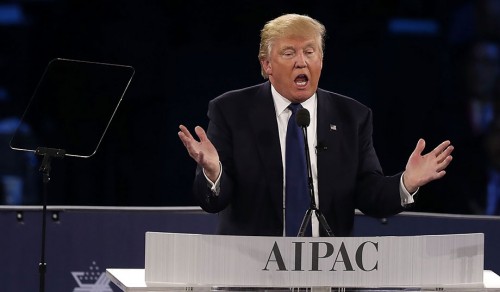 Then he and Dr. Slattery discussed Donald Trump’s pandering speech before AIPAC. As discouraging as it is to hear His Tremendousness spew the obvious lies about the existential threat that poor tiny Israel is under from the evil Palestinians and an Iran hell-bent on world domination, there is a limit to how much any candidate can be expected to overturn propaganda and indoctrination that has gone unquestioned for decades.

This is a fascinating show that you will want to spread widely.