Jessica Alba’s ‘Honest Company’ found to be peddling the same toxic laundry detergent chemical used in TIDE… turns out they failed to test their own products! 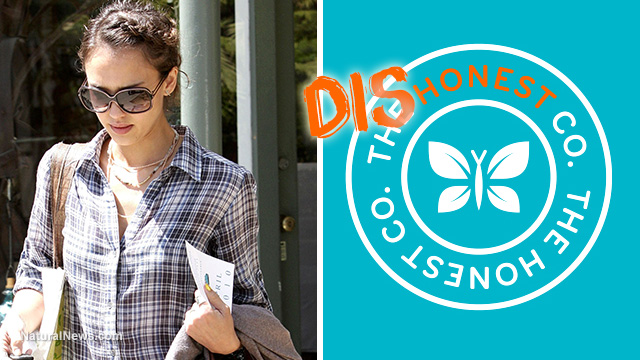 (NaturalNews) As a food research scientist and author of an upcoming book called Food Forensics, I’m totally floored to discover that Jessica Alba’s “Honest Company” failed to conduct scientific testing of the composition of their own manufacturing ingredients.

Alba sits atop a corporation valued at $1.7 billion based mostly on her good looks, easy public relations victories with the mainstream media and the (empty) promise that her products completely avoided using toxic chemicals like SLS (sodium lauryl sulfate), a chemical frequently found in conventional detergents. But according to an expose published by the Wall Street Journal, Alba’s own products are loaded with SLS.

Click here for the SLS description at the Environmental Working Group website, which lists SLS as a “low” concern for overall health. By the way, in my view as an active laboratory scientist, SLS is nowhere near the top of my list of concerning chemicals. SLS is probably 1/10000th the toxicity of BPA, in my opinion, and I personally wouldn’t care about a little SLS in The Honest Company’s products. But the point is that Alba promised the whole world her products were free of this chemicals… and they clearly aren’t. So it’s an integrity problem, a marketing problem and a shattering of the public trust. But it’s not necessarily really an urgent health problem, in my view.

How much SLS was found in Alba’s products, exactly? According to this article on Fortune.com:

Two independent lab tests commissioned by the Wall Street Journal found that the brand’s laundry detergent contained sodium lauryl sulfate, or SLS as it’s commonly called. In fact, one of the labs found that the concentration of SLS was nearly equal to that found in Tide, the popular detergent made by Proctor & Gamble.

A little more digging reveals that Alba’s supplier never even tested their own materials for SLS. As the LA Times reports:

Honest provided the Wall Street Journal with a certificate from its detergent manufacturer, Earth Friendly Products, stating there was no SLS in the product.

The detergent is supposed to be tested by Earth Friendly Products’ chemical supplier, Trichromatic West Inc.

But Trichromatic told the Wall Street Journal the certificate “wasn’t based on any testing and there was a ‘misunderstanding’ with the detergent maker,” the report said.

Instead, Trichromatic said it did not need to test for SLS because none was used in the manufacturing process.

Woah! Hold the presses! So Jessica Alba’s $1.7 billion company never tested for the toxic chemicals she swore to AVOID using in her products?

As a food scientist who routinely tests everything we sell at the Natural News Storefor toxic heavy metals — and by the way we reject a huge number of samples we acquire from various sources — I can only characterize the “Honest Company” business practices as extremely DIS-honest if not downright fraudulent.

How on Earth can this “Honest Company” claim to be selling products that are free of chemical ingredients if they never even conduct their own testing for those chemicals?

Are The Honest Company’s executives really so gullible that they believe whatever their suppliers tell them? Seriously? Everybody in this industry knows that suppliers LIE to you all the time, and that’s even more true when those suppliers are located in communist China. (Where do you really think Alba’s chemical ingredients come from, anyway?)

Perhaps Alba is too naive, too young or too inexperienced to even be in this business. If you’re going to slap the name “Honest Company” across your corporation, then you’d better actually conduct the scientific testing of the composition of your “honest” products. If you fail to do this, you’re just being totally dishonest.

It makes you wonder what other toxic chemicals are now lurking in The Honest Company’s products, doesn’t it? Apparently this company hasn’t even been testing their products for all these chemicals. So it’s a pretty safe assumption that even they have no idea what other chemicals might be lurking in their product line.

They honestly have no idea what they’re really selling, in other words.

As of today, I’m announcing a Natural News “pause” recommendation for The Honest Company’s entire product line unless and until they start conducting rigorous scientific testing of the composition of its products — for each production lot! — and starts making those test results available online. There is NO EXCUSE for a $1.7 billion corporation to not cover the relatively low costs of composition testing for their products.

In fact, I’m going to start testing The Honest Company products in my own lab. We’ve just added an organic chemistry section which can detect SLS at parts per billion concentrations, and it’s organizations like ours that need to keep these “honest” companies truly honest.

Oh, and just in case you weren’t already spooked about The Honest Company, Zero Hedge is reporting that Alba’s corporate executives have been furiously editing their website during the WSJ investigation. Via the WSJ:

When asked about the website changes, Honest co-founder and Chief Product Officer Christopher Gavigan said they were to help clarify, educate and accurately represent the company’s position. He said in a December meeting that Honest was also changing its product labels to match its website and had no plans to reformulate its detergent.

Hey Jessica Alba, here’s what you need to start doing to rescue your brand from a face plant

So what’s the solution for all this?

If The Honest Company wants to call me for advice, I’ll tell them exactly what they need to do. I run a high-end analytical laboratory that now includes a cutting-edge organic chemistry department with LC/MS-TOF instrumentation. We can detect SLS, BPA, BPS, solvents, chemical additives, phytochemicals, pesticides and much more.

The Honest Company, after now being caught lying to its customer base, needs to announce a new science initiative, comprehensive analytical testing of every production lot across their entire product line, and the public posting of composition results for all the chemicals they claim to be avoiding.

As a scientist, I want to know:

1) What is the actual ppb of these chemicals in The Honest Company’s products?
2) What lab did they use to conduct the testing? And what instrumentation and methodologies did those labs use?
3) What is the country of origin for the product ingredients?

And if I were a customer of The Honest Company, I’d be demanding a refund right now… followed by demanding the company start conducting routine scientific testing of its products and posting the results online.

By the way, if you want to know the full truth about what’s in your food — really, the HONEST truth — you can now preorder my groundbreaking new book Food Forensics, available now at Amazon.com and BN.