Ten UFO Documents That The CIA… WANTS… You… To…See??

The CIA must have a dark sense of humor, because as the X-Files gets a reboot, the spy agency has decided to place thousands of declassified documents detailing government research into UFOs on its website.

“We’ve decided to highlight a few documents both skeptics and believers will find interesting. Find documents we think ‘X-Files’ character Agent Fox Mulder would love to use to try and persuade others of the existence of extraterrestrial activity. We also pulled documents we think his skeptical partner, Agent Dana Scully, could use to prove there is a scientific explanation for UFO sightings” the agency said in a post.

“Below you will find five documents we think X-Files character Agent Fox Mulder would love to use to try and persuade others of the existence of extraterrestrial activity.”

The agency goes on to list its chosen cases in two different categories, divided based on whether one is a believer (Agent Mulder) or a skeptic (Agent Scully).

The CIA has even written an article describing how a would-be sleuth would go about investigating a flying saucer. John Greenwald, a UFO enthusiast, had spent almost two decades filing Freedom of Information Act Requests for the files, which were allegedly declassified in 1978 but withheld. On January of last year he posted all 130,000 pages of declassified UFO documents (from Project Blue Book, Project Sign and Project Grudge) on his online database The Black Vault.

Not to be outdone, the CIA has just highlighted several UFO reports on its own website, and included a searchable library for all the declassified investigations. It is unknown whether it did so to take away from John Greenwald’s effort, or to get the information greater exposure for its own esoteric purposes. Unfortunately, the declassified documents are only dated between the late 1940s to 1950s (leaving much of recent history either unexplored or not yet declassified), and the official stance is that the air force investigations were concluded after it concluded that:

“No UFO reported, investigated and evaluated by the Air Force has ever given any indication of threat to our national security (and) there has been no evidence indicating that sightings categorized as ‘unidentified’ are extraterrestrial vehicles” and that there was no evidence that the sightings “represent technological developments or principles beyond the range of present-day scientific knowledge.”

These are the documents that They do want you to see:

Top 5 CIA Documents Mulder Would Love To Get His Hands On:

Top 5 CIA Documents Scully Would Love To Get Her Hands On:

Number 4 is of Mulder’s files is of particular interest; it details how the Air Technical Intelligence Center at Wright-Patterson Air Force Base in Ohio examined between a thousand and two thousand UFO reports. While most were easily explained away as the wrongful identification of clouds, meteorites or aircraft, around one hundred reports could not be explained.

The conclusion was that surveillance has to be continued to ascertain the true nature of these reports, but done under the radar so that the public were left unaware of the investigations.

“Notwithstanding the foregoing tentative facts, so long as a series of reports remains ‘unexplainable’ (interplanetary aspects and alien origins not being thoroughly excluded from consideration) caution requires that intelligence continue coverage of the subject.“

“It is recommended that CIA surveillance of the subject matter, in coordination with proper authorities of primary operational concern at ATIC, be continued. It is strongly urged, however, that no indication of CIA interest or concern reach the press or public, in view of their probable alarmist tendencies to accept such interest as ‘confirmatory’ of the soundness of ‘unpublished facts’ in the hands of the U.S. Government.”

Beyond popularizing the X-Files reboot, the CIA’s true purpose remains the greatest mystery of all- though some speculate that it’s all part of a grand… PR strategy. 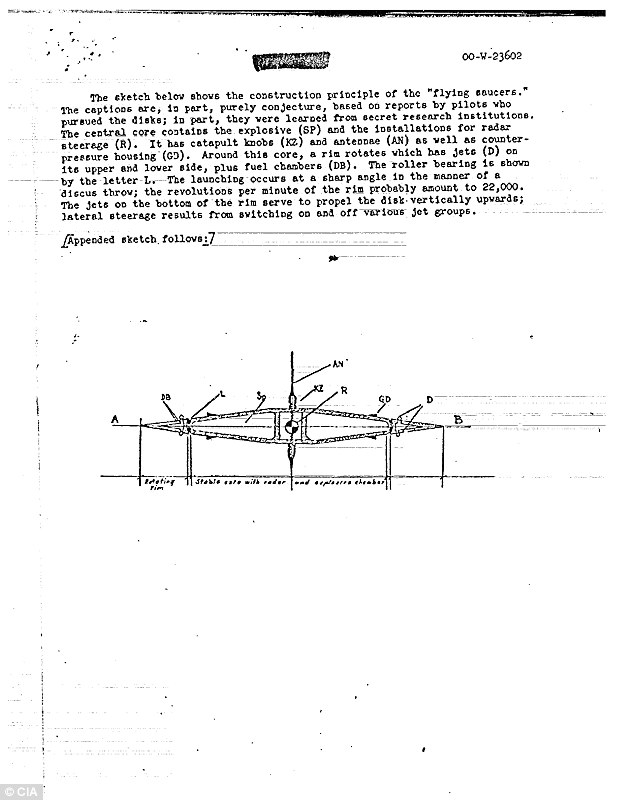 Sketch of a flying saucer. One of the documents released by the spy agency.

Executive director of the Paradigm Research Group, Stephen Bassett, who is campaigning for the US government to admit that aliens are visiting Earth, said to The Mirror that the return of The X-Files has been to the CIA’s benefit.

“It appears the CIA used the revival of the X-Files franchise as a convenient time to remind the public the agency has, in fact, engaged the extraterrestrial presence issue in the past,’ Bassett told the newspaper.

“Post-disclosure the CIA will have substantial public relations issues as it has played a significant role in maintaining the truth embargo over six decades.

“These recent postings could have an inoculative effect in service to the agency’s future PR strategy.”

This Article (Ten UFO Documents That The CIA… WANTS… You… To…See??) is free and open source. You have permission to republish this article under a Creative Commons license with attribution to the author(CoNN) and AnonHQ.com.