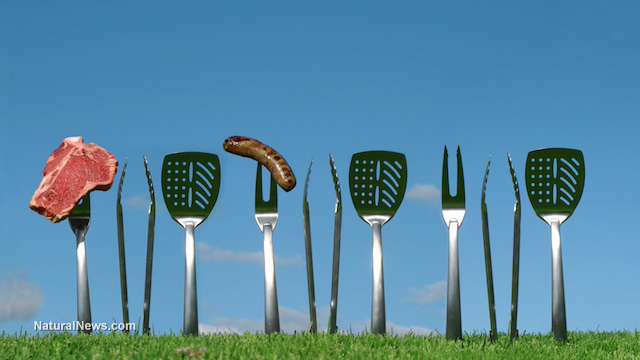 (NaturalNews) A new era of fake, toxic meats is upon us. While tofu, seitan and veggie burgers have been around for ages to satisfy the growing vegetarian and vegan community, in the last few years the food industry has been on a mission to win the hearts of the health-conscious carnivore, too.

According to the fake meat producers new, lab produced, meat alternatives taste, look and feel the same as meat and could be the next big food revolution. Or is this just another sneaky way to slowly reduce our growing population?

How fake meats are made

In 2009, Ethan Brown founded “Beyond Meat” hoping to create a solution for the greenhouse gas pollution the meat industry creates.

To make the fake meat, several questionable ingredients, including pea and soy proteins, are mixed with toxic canola oil to give the “meat” its fat content. Then the mixture is pressed through a machine that goes through a few heating and cooling steps to form the strips and give them texture.

A new way to poison the world

Are these new meats really as healthy and sustainable as their makers would have us believe? Let’s take a closer look at some of the ingredients.

Canola oil: one of the unhealthiest, most toxic oils out there, which is often derived from GMO seeds, and extracted with chemicals such as hexane.

The canola industry has long claimed their product to be inexpensive, and support heart health while reducing the risk of coronary heart disease. An FDA and money-backed up hoax. Canola oil is a derivative of rapeseed oil which was found to be highly toxic due to its high levels of erucic acid. Consumption is associated with constipation, high incidence of fibrotic heart lesions, disorders of the central nervous system, and several types of cancer.

While scientists claim to have successfully altered rapeseeds so that they produce less erucic acid, this overly processed GMO oil still contains too much of it to be considered safe.

Canola oil is not the only toxic substance to be found in these fake meats. Soy protein isolate is nothing more than an industrial waste product. Maltodextrin is a sugar produced from hydrolyzing starch, often made from GMO corn. Yeast extract always contains processed free glutamic acid; also known as MSG, or monosodium glutamate. Terms like “natural flavors” and “spices” can hide MSG, too.

After pumping billions of dollars into the vaccine and sterilization industry, Bill gates is now investing in these fake toxic meats, too. Why, one may ask?

The meat industry is responsible for about 14.5% of human-induced greenhouse gas emissions. This is more than the whole transport sector combined. According to the Worldwatch Institute, our demand for meat has tripled in the last 40 years.

In 2010, Bill Gates already made his agenda clear. There are too many people populating the world to reduce CO2 emissions and conquer climate change. He implied that vaccines and sterilizations could be the answer to controlling the growing population and reducing healthcare costs.

“If we do a really great job on new vaccines, health care, reproductive health services, we could lower that [the growing world population] by perhaps 10 or 15 percent.”

Watch the video with the full story here.

Could these toxic meat alternatives be the next big scheme to reduce global population, CO2 emissions and healthcare costs? To play it safe, avoid these fake meats, and opt for organic, whole foods instead to make sure you don’t end up in that 10 to 15 percent.